This page will serve as a collection of research and analysis on activist, Maya Angelou. The boxes provided below will allow readers to navigate through the vast information about Angelou in a orderly and easy fashion. The information presented in this guide will relates to Angelou’s life, how her life connects to material read through the course of Religion 251, and lastly how she represents the La Salle University’s mission. The complex study of peace, love, and justice throughout the course allows question of how a guru/historical figure not only represents but viewed those three factors. At the end of the guide the audience will be able to recognize the importance of such a figure whilst the University will see her reaching the school standard.

Inside the life of Angelou

This source notes on Angelou’s personal attachments to her past. Ultimately the history and background of her character. Her deep interest in novelty, education, and forming into a writer was her mold and the foundation to her becoming about – her. In her adult life she went on with her writing, publishing her volumes of autobiography and more. This all attributed to Angelou’s life, especially as a African American women, her build of character and what would be just one of her many successes in the end.

To provide some insight, Maya Angelou, born in Missouri in 1928: activist, author, and advocate, lived a very successful life up until her demise in 2014. Some of her many accomplishments consist of performing in Broadway, publishing her vast written works, being awarded with not only a Pulitzer prize but also a medal, the medal in which was presented by the president himself Barack Obama, and much more. Even posthumously, Angelou is still be recognized for her accomplishments and as of this year, 2021, is being acknowledged on the coin. To be specific she is to be the replacement/new face on the back of the quarter. Angelou continues to be recognized for her personal accomplishments as well as for her contributions to the community and nation through her stature of a public/historical figure. 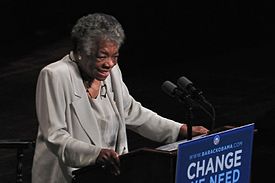 From adolescence, Angelou was met with various obstacles she had to face. In this article those “obstacles” are depicted. Some consisting of oppression due to the color of her skin, sexual abuse by the hand of her own mother’s boyfriend and facing somewhat of a disorder - becoming mute. In this article, the audience will be able to get a look inside of her life and see all her hardships, which is touched on, and how she dealt with such distresses. In addition to taking a look into her harsh background a firsthand account, given by Angelou herself, is presented in which she personally tells stories of some of what she had undergone.

This article shines light on all the good Maya Angelou was able to do and experience throughout her life. Some of these accomplishments occurred while she was undergoing some hardships, which further proves her admirability and recognition as a historian. At a young age, 16, experiencing childbirth and successfully supporting herself and child at a young age, being active with Dr. King through a Civil Rights movement, and a plentiful amount of other accomplishments. Opposed to letting the worst of her situation destroy her, she furthered herself in life and won prizes to show for it. This articles shows her successes despite what was taking place on the back end.

The link below serves as a passage to a video of Maya Angelou performing her extremely popular and well known poem, "On the Pulse of the Morning," at the historical inauguration of previous president, Bill Clinton. 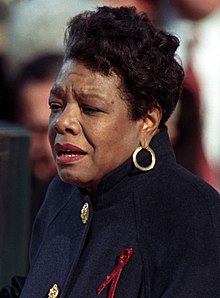