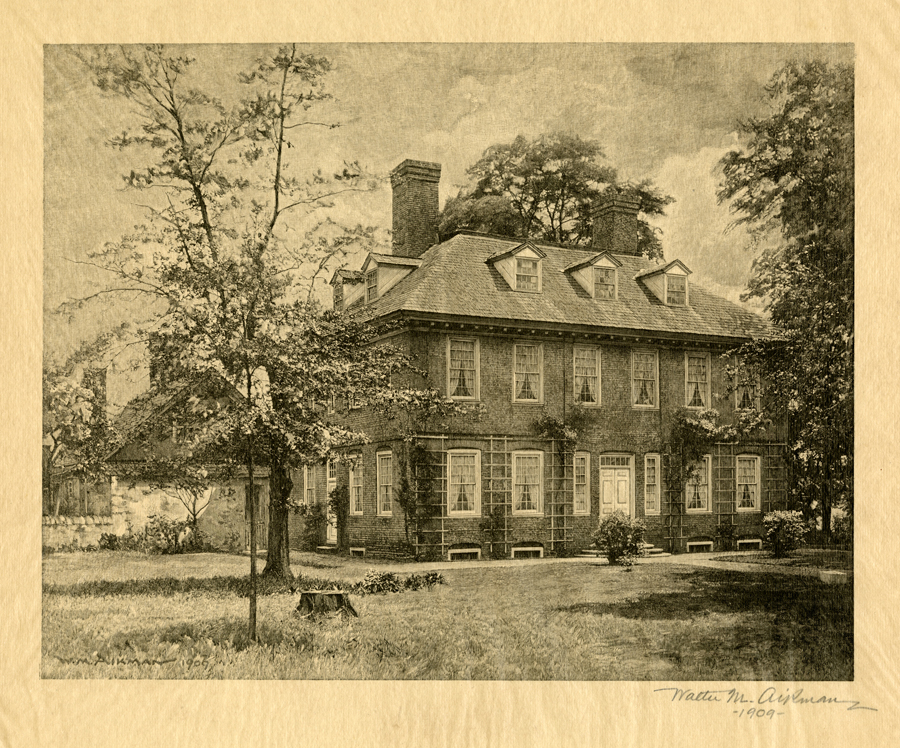 "Stenton is a property administered by the National Society of the Colonial Dames of America in the Commonwealth of Pennsylvania. James Logan erected this fine example of early Georgian architecture in the countryside near Philadelphia between 1723 and 1730. Logan had come to Philadelphia with William Penn in 1699 as his secretary, and for the rest of his life remained the Penn family’s representative in the colony and at the center of Pennsylvania’s political life. Although now in a densely populated urban area with factories and railroad nearby, Stenton’s present three-acre site preserves significant buildings, landscape, and objects" (via stenton.org).

The Stenton property, situated at the corner of 18th Street and Windrim Avenue, presents opportunities for local history research. James Logan's lands once extended to the land now owned by La Salle University. His descendants developed the land; building new properties and acquiring others. Use this guide to find the many connections between Stenton and the history of our grounds at La Salle.

James Logan (1674- 1751), “provincial councilor, scholar, and William Penn's secretary in America, was born in Lurgan, County Armaugh, Ireland, the son of Scottish Quakers Patrick Logan, a minister and teacher, and Isabel Hume. In 1726 Logan moved from Philadelphia to ‘Stenton,’ his large plantation near Germantown, to advance his scholarly pursuits. Logan encouraged the research of John Bartram, Benjamin Franklin, and others and thus helped to give shape to the developing scientific community in Philadelphia. After Logan's death at Stenton, his library of more than 3,000 books was bequeathed to the public and later merged into the holdings of the Library Company of Philadelphia. Logan's personal papers at the Historical Society of Pennsylvania include his letterbooks and several manuscript treatises” (via American National Biography online).

William Logan (1718-1776), son of James Logan and Sarah Read Smith, was born in Philadelphia. “At age 12, he went to England to study with his uncle, also named William, who was a doctor in Bristol. After returning to Pennsylvania, he worked with his father as a Philadelphia merchant. In 1741, he became the attorney to the Penn family. He was elected to the Common Council of Philadelphia on October 4, 1743 and continued to serve until 1776 when the Declaration of Independence dissolved the existing municipal government. When his father died in 1751, William inherited the family's home, ‘Stenton.’ William married Hannah Emlen, the daughter of George Emlen, on March 24, 1740. Hannah and William had six children, four of whom survived childhood. These children were Charles, George, Sarah, and William Jr. William died at Stenton on October 29, 1776 and Hannah died on January 30, 1777” (via the Historical Society of Pennsylvania website).

The Historical Society of Pennsylvania is home to the Logan family papers, which include material on William Logan.

George Logan (1753-1821) son of William Logan and Hannah Emlen, was born at “Stenton.”  “He attended the Friends Public School from age eight to fourteen and continued his education in England from 1768 to 1771. After an apprenticeship to a Philadelphia Quaker merchant, Logan was allowed to pursue medicine and obtained the M.D. from Edinburgh in 1779. Having already become master of Stenton due to the recent demise of his parents, he returned to Philadelphia in 1780. He married Deborah Norris in 1781; they had three sons. Logan actively practiced medicine only briefly. By the mid-1780s he was devoting himself to making Stenton a model, scientific farm” (via American National Biography online).

The Historical Society of Pennsylvania is home to the Logan family papers, which include extensive material on George Logan. His wife, Deborah Norris Logan, wrote a biographical account of his personal life which was edited by their great-granddaughter Frances A. Logan and published in 1899: Memoir of Dr. George Logan of Stenton . . . with Selections from his Correspondence.