The Voter Engagement Action Team worked to get eligible voters registered to vote and encouraged those registered voters to create a voting plan on Election Day. This action team connected with students, faculty, and staff within the La Salle community as well as friends and family locally and nationally. The resources below demonstrate intersectional justice by connecting Voter Engagement immigration, LGBTQ rights, and criminal justice reform. 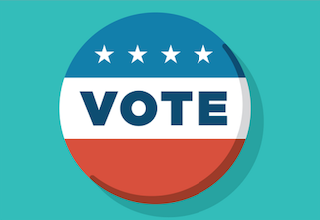 "Come to Vote, Stay for the Art" by Carol Pogash, NY Times

This NY times article connects the issues of voter engagement and immigration. The article spotlights Amir H. Fallah, an artist with personal ties to immigration. Amir displays his nonpartisan art at a polling location in San José, California, to encourage voters to think about their vote and to "vote like your life depends on it" because the lives of immigrants often due depend on the vote.

Many transgender and gender nonconforming people experience blocks when trying to vote. This short blog post describes the voter suppression tactics used to silence the votes of those in the LGBTQ community and legislation Congress is trying to pass to restore the Voting Rights Act.

Mass incarceration is an important issue when considering criminal justice reform. This article focuses on the topic of allowing previously incarcerated citizens to vote since most people who have been convicted of felonies lose their right to vote. Additionally, this article touches on the demographics of those who are convicted; they are disproportionately black and brown.